Copa wine by the glass display.

Wine by the glass is here!  Where wine in the box before never really caught on and gained the ire of many fancy wine connoisseurs, and the idea of a wine cooler only appealed to teenage girls but soon grew old and passe as they grew old and sophisticated women, wine by the glass holds the promise of a new marketing tool that will appeal to the upper crust of wine drinkers everywhere (or perhaps the 2010 World Wine Champion just has a back stock of there award-winning wine and needs to dump it quickly and cheaply before it turns to vinegar?).

Whatever the case the brand Copa now offers wine by the glass in cute plastic cups sealed like yogurt with a plastic snap lid.  Easy to drink in a car, while riding a bike down the road or while operating heavy machinery.  It is almost as if the display in the picture shown above got transported from some David Foster Wallace-like future, almost like it came straight from the Year of Copa Wine By the Glass.

The good news is you can get any of the fabulous types of wine such as a Pinot, a Merlot, a Cabernet or a Chardonnay for as low as $2.99.  Now I am sure you can get a cheap bottle of wine for close to the same price, but for how long?  With this new marketing ploy maybe this marks the end of cheap bottles and the introduction to expensive glasses, or are they cheap glasses?  Is that too many questions?

Anyway, if you are cruising the street and need a quick pick-me up then dip into your local store and grab a refreshing taste of the 2010 World Wine Champion.  Also of note Copa won the Dupont Packaging Award for Innovation Excellence with this nifty glass of wine.  So perhaps the glass is collectable.  Below find a few more pictures of this exciting development, or I am sure they will be next to the wine coolers in your local liquor store soon.

While L.A. the Blog is a little late on the scene reporting that Papaya King is opening in Los Angeles, well it is and it will be here this Spring (L.A. Weekly reports in April).  It is located just off Hollywood Boulevard’s main club drag on Wilcox Avenue.  The question remains how late it will be open, but 24-hours a day sounds good.

Not to be confused the Papaya Dog, nor Gray’s Papaya, but yes it is the original chain that opened back 1932.  For a little rumor history, people say that Papaya Dog was started by a former employee of the original Papaya King, and it might be said about Gray’s Papaya too.  All I know is that if the hot dogs have that New York City snap, they will be something unique in Los Angeles.

(This is a side note – if you ever get the chance go to Criff Dog in NYC, it’s worth it just to see the babe hugging the dog, and it’s yum!)

Stay tuned for more updates as they come in … 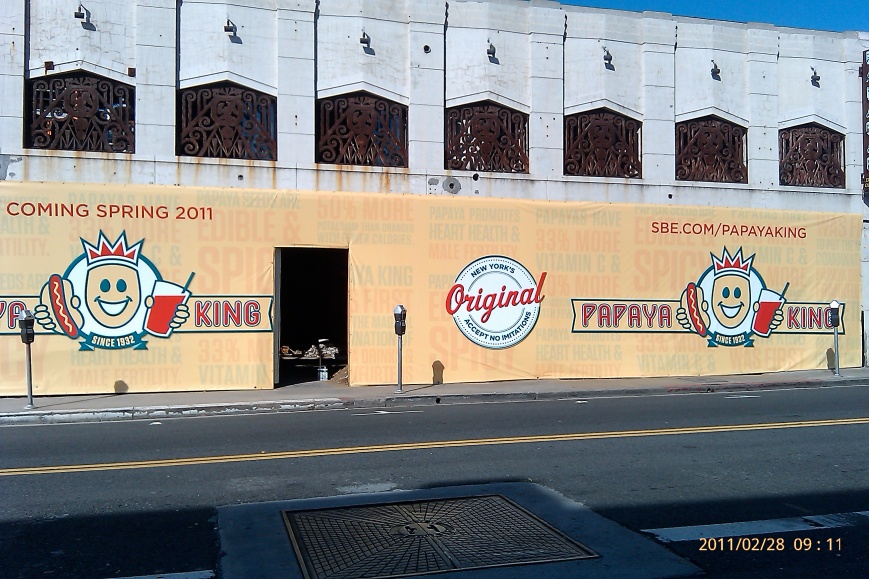 UPDATE 4/19/13:  Papaya King didn’t last long in Los Angeles, most likely from the crappy service, and is now closed.

It is safe to say that in Los Angeles these days it is hard to find a cheap, good meal.  Not on Vine between Santa Monica Boulevard and Melrose Avenue.  I am talking cheap, good and as authentic as you will get for Mexican food.  I am talking Cactus Taqueria and it ain’t your higher priced organic / healthy style of Cali-Mex-Whole Foods fair, not one bit.

When I say cheap I mean $1.25 for a taco, and the tacos are damn good!  Just like the one I had in Tijuana a few years back.  Of course if you are a taco fan you probably know of this joint that opened in 1992, and sits across the street from the grade school that Marilyn Monroe attended.  I definitely rank it the cheapest and best for the $ in the area. 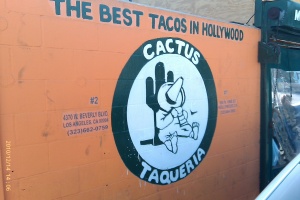 Oh yeah if you are vegan I would stay away : (

While I have only had the beef and carnitas tacos, I can guarantee from the long lines at lunch, and the jam-packed lines during the weekend that Cactus makes millions of people happy each year.  The red sauce is HOT, so be warned unless you go that way, and a ten-year veteran of Cactus tells me the beef burritos (a little more pricey at $7) are his the best in the city.  That is if you can afford them!!

If you are wondering why I am blogging about old cheap restaurants in Los Angeles, well just look at how Google sold out when you type in Hollywood Cheap Eats.

Is Yelp and Urban Spoon really the only people talking about cheap eats out there?

All you get is Urban Spoon that lists Cafe 101, or In-N-Out Burger.  Both relatively cheap but they all break the $5 mark (and 101 breaks the $15 dollar mark jeez!).  Yelp isn’t much better.

So to sheer away from the Google advertising blitz I bring the truly cheap that is worth eating.  So next time you are in Hollywood and you only have some parking change left and you need to eat, and you can’t seem to find your favorite taco food truck, then Cactus Taqueria can fulfill your need.

CORRECTION:  The above posting mistakenly referred to Cactus Taqueria as the #1 spot in Hollywood ranked by LA Taco, when in fact I have been informed that Cactus Taqueria #1 is actually just the full name of the Taco joint.  Per the comment below left by LA Taco they rank it as not #1.  My bad!!!!