May 10, 2012 – New York University hosted on Thursday night an evening of thinking about urban planning and the future of our cities.  As a quick disclaimer  this writer for L.A. the Blog is an alumnus of NYU and attended the discussion, so now there is no conflict of interest, nor is this shameless advertising for NYU, okay!

Jerry Hultin, the president of the Polytechnic Institute of NYU, led the evening soiree, and for all you would be politicians, I can personally attest that Mr. Hultin greeted and spoke with every guest at the event before his talk on urban planning, including yours truly.  In many ways the event was as much as a discussion of our cities landscapes as it was an introduction of the universities newest school – The Center for Urban Science and Progress (CUSP).

Founded in an effort by New York City to stay competitive in this growing age of science and technology, NYU CUSP is a joint partnership between the city and NYU.   You can read a full press release about the new school here.  Basically NYU applies the students and the academics, and the city supplied the land and the building.  Housed in Brooklyn it will take a long unused MTA building and convert it into the future!!!  Really the building looks pretty in the infographic they presented.  There is a nice video on the project found here that fills you full of hope.

Enough about the facts, lets talk about urban futures.  Well, smart cities for one.  What is a smart city you ask?  Nothing really at the moment, it is just a theory where we use all the available data and renewable technology, along with perhaps some cool new inventions like grass roofs (not reefer, but actual grass) and vertical farms.  Think a farm outside your window.  When we say data think of for example information on electricity usage and technology that directs the flow of electricity only when needed to areas that need it.  You may think that is the case now, but in actuality electricity is mostly going everywhere at once in high volume, but if a “smart” grid can shut off certain sectors of the grid not in use at certain hours (like 3 a.m. at my house), then it can direct it elsewhere lessening the need for the higher volumes to cover all areas at once.

I am sure you can imagine that resources like water can use the same technology, and traffic has ebbs and flows too so if we can speed up traffic through technology that better monitors heavy traffic areas and adjusts on a more minute to minute basis, we could cut down on electricity or gas consumption.  Consider if we go electric car in the next 10 years, where are people gonna charge their cars?  We sure don’t have a garage to plug into so some public charging stations would be nice too.

Hultin mentioned that IBM has started a Smarter Cities program (more selfless advertising on our part).  L.A. the Blog would like smarter politicians and corporations to go along with our smarter cities if we are on the subject …

Other than smart cities the major topics of importance that pose a challenge:  distribution of goods throughout the world and educating our future generations.

It was noted by an audience member and confirmed by Mr. Hultin that in India, a study showed that 40 percent of agricultural food was lost transporting it from the field to the table.  With such a high percentage of loss this represents a serious challenge that urban planning should address.

The other portion of distribution is the rising cost of fuel and the dense populations that make transporting goods more difficult.  Hultin noted that India and China will both be building and planning cities for 1 billion people in the future, so just the logistics of distribution in such an environment poses serious problems.  On top of that if they build cities as we build cities in the U.S., Hultin estimated it would take six earths to provide all the resources to supply the world’s population.  Obviously we only have one earth so Houston we have a problem.

Just to scare you into caring we are linking to a report that Hultin mentioned called Resource Revolution. A quick disclaimer, we haven’t read the whole report so don’t blame us if it is actually some propaganda put forth by bleeding left-wing liberals or screaming right-wing republicans.  We looked at the percentages in the front and decided it was scary enough and we didn’t need any more terror.

Going right into educating the young, does everyone else feel like this writer and wishes they pursued engineering rather than a liberal arts education?  Well that is part of the problem, how do we get future generations interested in science and engineering?  Get kids to stop running of like rap stars and rock’ n’ roll gods so they can get down to the business of saving all us old people.  Maybe we need some drug addict engineers to appear on TV yeah?  American bandstand for engineers?  Though we are speaking tongue in cheek about this, sadly for fields like engineering it helps to start people young as who the hell at forty is going to go back to basic math class?

There is also a surprising disparity in the engineering field between men and woman.  Most engineering schools look like this – guy, guy, guy, guy, guy, guy, guy, guy and 1/2 woman – meaning there is way too many dudes in the kitchen cooking up technology.  Since women are such a large part of the population, more the 50 percent last time I checked, it would help to have them helping out too.

L.A. the Blog will leave with one single quote from the evening, Hultin when describing what the greatest resource of the 21st century said, “Talent is the oil of the 21st century.”  Smart cities won’t just build themselves out on their own, we need smart people too.

Adding to the previous and earlier blog about crazy art cars in Los Angeles, we have a few more to add.  You can  check out the original post here.

We needed to throw in a graffiti bus found down in Venice, for what is an art car posting without the a cool-ass bus in it?

What do you to with that old police interceptor? You turn it into the Peace car, at least that’s what these guys did. Hey, it’s the peace car, not the pa-lease car.

Heck we know who these guys are, but in all fun we want to leave it up to the viewer to guess what this picture is all about. An anarchy van, a strip club, masks and a pirate flag? All we can say is they are up to no good …

How did this end up here? Oh, well happy marriage you two – Gabe and Bridget get married!!! 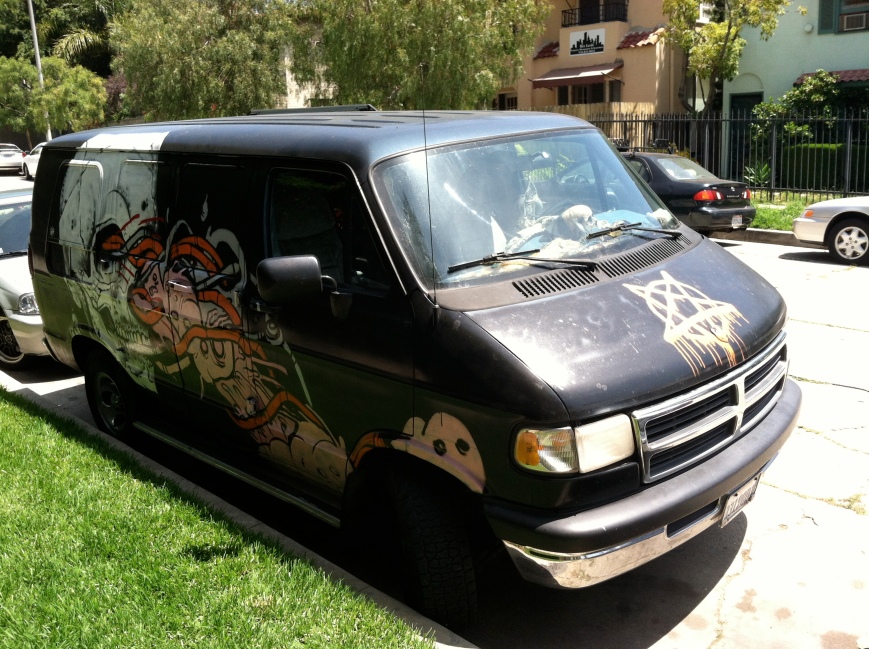 We needed to add one more crazy art car pick, this van is seen lurking around Hollywood, and we love it for its tribute to those things dead and satanic. Go Turbo Lover we love you! 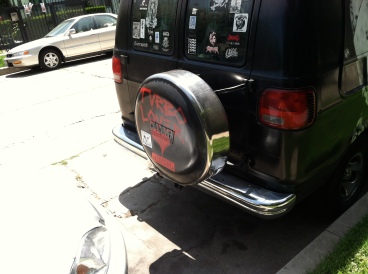 Though not unique to Los Angeles, this beautiful city has a collection of cars that people have taken and personalized in such a way that we are sure they are one of a kind.  So without out further ado the blog brings you the first few photos in a series of car photos that speak so loudly they couldn’t be ignored:

Well, obviously a heavy drinker’s car. Not only does the car float with so much cork on it, when the owner drives drunk he is protected from small fender benders. Wine anyone?

Yes, not only does this car scream Nor-Cal with the “Hella” lights, it also hella is an advertisement for cigs, Camel cigs. L.A. the Blog hopes the owner won the car from collecting Camel cash. 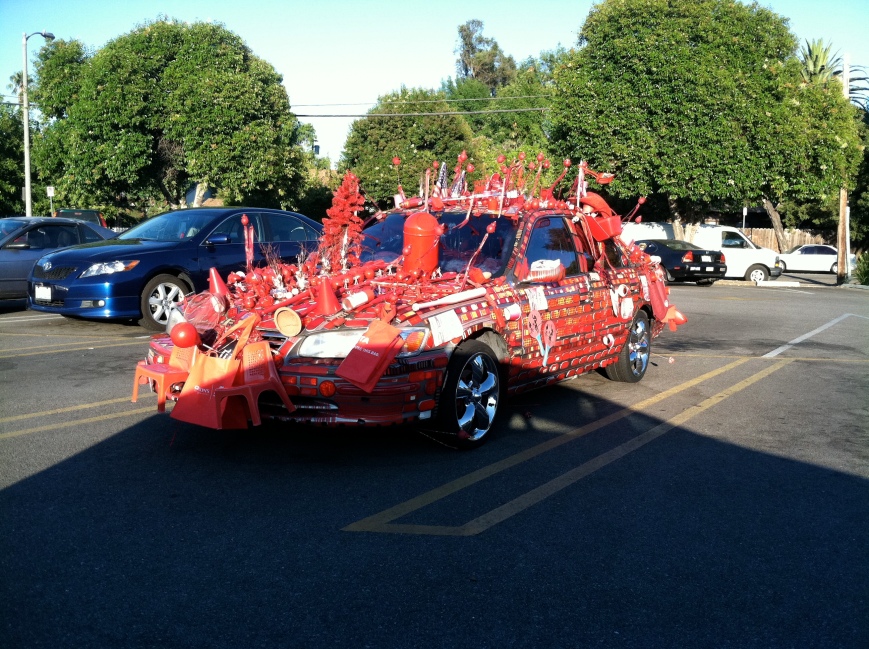 This car is made of so many miscellaneous red items that we can’t really classify the car, but choose to call it “Classy Red.”

We thought this car just looked rather cool and fast …